Since it seems that everyone and their mother is doing a “year in review” post, I find it fitting that I be no different and write one as well - except it’s three weeks later than everyone else. 2011 was an exciting year for me for a variety of reasons, as I went through some big work and life changes, met some great new friends, and reunited with a few long lost ones.

In February of 2011, I left my job at exhibit-E where I was a web developer making web sites for the art world. Over the past few years, I’ve always done freelance work on the side whether it be small contract jobs or building full social networking websites as a solo developer. My decision to leave exhibit-E seemed to make sense now - I wanted to see if I had what it took to survive as a full-time freelancer while working under my own company name before I got too old and perhaps couldn’t take on so much risk. I wasn’t too concerned with finding work, but more so about being able to GROW my own company; the latter obviously being the hardest part. Within a week or two, I managed to land myself a great gig as the lead developer for the RachaelRayShow.com…and now it was off to the races!

In March, I went to PyCon 2011 in Atlanta, GA. This was my first programming conference and I met some fantastically smart people there - some of which I’m fortunate to actually work with right now on some of 3atmosphere’s current projects, and some that I still keep in contact with via email. The talks were great and the “networking” at night (aka exploring ATL’s nightlife) was the best part of the trip. I’m really looking forward to returning to PyCon again this year. 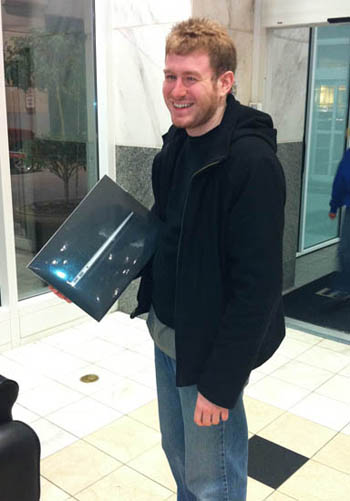 Nick holding up his new laptop that we bought at a mall in Atlanta during PyCon…during iPad 2 (insanity) launch day!

Over the next few months into the early summer, the project load at 3atmospheres really started to pick up. I take pride in the fact that I never made one cold call or solicited ads for work - all the requests we got in were from word-of-mouth and I couldn’t be more proud of our humble beginning. It picked up so much that the once lonely one-man show (me!) turned into (at the peak) six people working on several different projects. I found myself quickly transitioning from coding to project management, which I would say still is evenly split for me today. Out of necessity for a meeting spot, we bought some seats at General Assembly where we currently work.

On a personal note, I got engaged at the end of the summer to my lovely girlfriend of over four years, Patricia, which easily made 2011 the best year of my life thus far.

In September, I was fortunate enough to get to go to three conferences:

And for the rest of the fall season into winter, it was just work, work, and more work - literally every free hour I had was devoted to meeting the deadlines that were set at the end of the year.

Let’s Wrap It Up…

2011 was a great year and I’ve never worked harder, been more tired, and, at the same time, had as much fun as I’ve ever had in my professional career. I am so lucky to have gotten to meet and work with such smart people, clients and coworkers alike, and I’m extremely proud at how far we’ve come today. Admittedly, it wasn’t always rainbows and butterflies with work, but for all the negative moments I’ve had this year, I’ve used it as a learning experience and I wouldn’t trade it for a second. I get to program in languages and frameworks of my choosing (Python and Django!) and get to work with people that are smarter than me. Here’s to a great 2011 and an even better 2012!